skip to main | skip to sidebar

Wow! Where have I been??

Greetings from the frozen North! 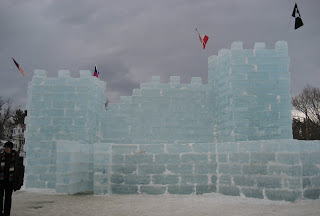 Maybe I've been Hibernating for the winter but I never got around to blogging about last summer. Too busy enjoying it I guess. The Dutch Ovens have been hibernating in the garage and, though it's still very much winter here, my thoughts are looking ahead to Spring. I have plans for revamping the flower garden and for getting more use out of those Dutch Ovens. I have been enjoying a couple cast Iron skillets in the house. I'm going to have to come up with a lot of egg recipes since my chickens have started laying. So I've been visiting my DO groups and blogs today as a fresh blanket of snow covers the ground. At least I can think Spring thoughts and maybe find some inspiration here on the Internet. I'll try to keep this blog more updated this year. Until then- a pic of one of my Girl Scouts last Fall. 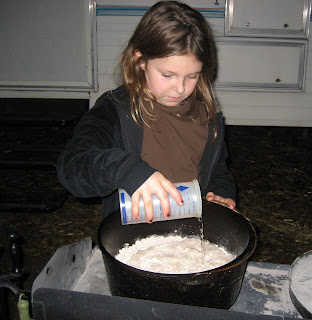 I tried out a couple more Campbell Soup recipes Saturday. They're simple and easy so I think they'd be good to use when we are camping with the Girl Scouts. Both of these are definite possibilities and we would make them again anytime. First I'll give you the recipes in the book and then I'll tell you what we did. 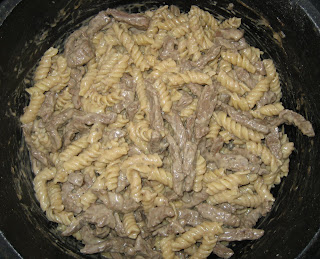 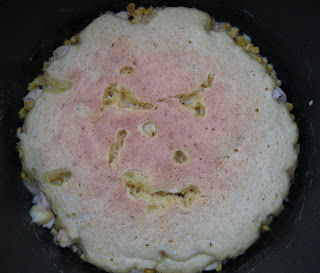 Campbell's Southern Cornbread Chicken Pot Pie
1 can (10 3/4 oz) Campbell's Cream of Chicken Soup
1/8 tsp pepper
2 cups cubed cooked chicken or turkey
1 can (about 8 oz) whole kernel corn, drained
1 can (11 1/2 oz) refrigerated cornbread twist
PREHEAT oven to 425 F
MIX soup, pepper, chicken and corn in saucepan and heat through. Pour into 9" pie plate.
SEPERATE cornbread into 8 pieces along perforations. (Do not unroll dough.) Top hot soup mixture. Bake 15 minutes. or until cornbread is done. Serves 4.
What we did:
We basically did the first one just as the recipe says only we did it in the 10 inch Dutch oven instead.
The chicken pie we had to do a little different. I should have paid more attention to the recipe before we started. It is meant to fit into a 9 inch pie pan so it was spread a little thin in the 12 inch Dutch Oven. I should have doubled or even tippled the chicken mixture. You could easily cook the chicken in the Dutch oven, then add the other ingredients. I had already precooked the chicken while I was cooking chicken for something else. The corn bread we did completely different because we could not find the twists listed in the recipe. We just used a box of Jiffy Cornbread mix. I mixed it according to the package directions and topped off the chicken. It worked great and was actually a good amount for the crust. So we had a think crust with a thin layer of chicken but it was yummy. Next time I'll use the same amount of cornbread with more chicken filling. In the picture it looks a little pink instead of the brown it was. I don't know why. I tried to take it a couple different ways but still looked pink. And what's up with that face? Looks spooky but embarrassed.
Posted by Ruth at 7:34 PM No comments:

A Slash of Color and a DO Experiment 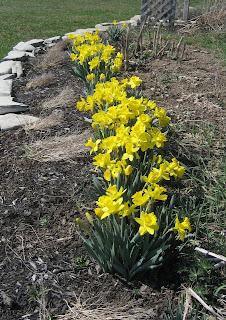 Finally some color in the garden! Not a lot and I see there is a lot of grass growing and a lot of clean up to do. At least the weather's been nice! It's been like summer the past few days. I hope it continues. 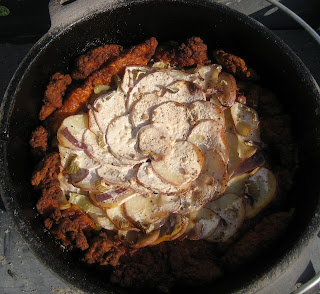 I thought I'd try an experiment in the DO. I had a bag of Buffalo chicken tenders in the freezer and wondered about cooking them in the Dutch oven. Maybe I should stick to following other people's recipes. Well, we ate and learned, so I guess it wasn't totally unsuccessful. So I don't have a recipe but here is what I did. I put the Buffalo chicken tenders around the edge of the pot. Then I filled the center with layers of potato, season w/garlic pepper, onions, celery, and blue cheese dressing. I had debated between the Blue Cheese flavor (since Buffalo wings are traditionally served with celery and blue cheese) and Ranch (I know the Dorito's Buffalo Ranch flavor is awesome). Anyway, we went with the Blue Cheese. Now for the problems with this or what I think the problems may have been. First of all it was quite windy. I think this may have contributed to the coals burning down quickly. It seemed that I had a lot of ash and I had thought we had started enough coals but the heat seamed to fizzle out long before the potatoes were done. So we started some more coals and emptied the old and started over fresh, well it did not take long to finish up the cooking but I think, being impatient, I put too many coals on the bottom causing it to burn. Second of all, I think there was not enough liquid to cook the potatoes properly. It was just the dressing and whatever came out of the food during cooking. We did eat it, and except being a little overdone on the bottom and some of the potato edges were a little tough, it tasted pretty good. So it did not go to waste and I think we learned a few things so I will say that it was not unsuccessful. Next time I would add some more liquid (maybe chicken broth?) and I would not have the dressing on top -It got too dried out. Maybe mixed with some more liquid it wouldn't. Maybe I shouldn't use the dressing at all. Maybe I should just layer some crumbly blue cheese in with the chicken broth. Maybe I should just find a recipe and stop trying crazy things. Maybe I should try the Ranch. Anyway you look at it, it was good because we moved into the back yard instead of cooking in the driveway in front of the garage doors. So LIFE IS GOOD!!!
Posted by Ruth at 3:45 PM 1 comment: 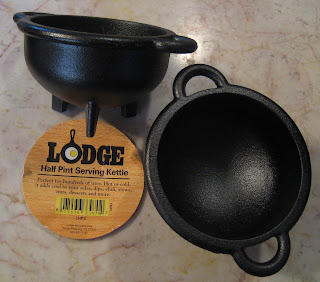 I saw these cute little pots at Herb Philipson's today and could not resist! They are a Lodge half pint serving kettle. I'm not sure what I'll use them for but they were just so cute I bought two. The label says they are perfect for hundreds of uses so I'm sure I'll think of something. I thought they would be perfect for something served with a sauce or maybe melted butter, or just to serve your stews, chili, etc. Hmmmm, what should I make to use these?
Posted by Ruth at 4:52 PM 3 comments: 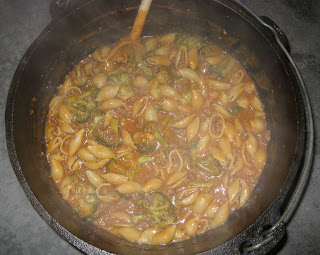 COOK beef in skillet until browned. Pour off fat.

ADD soups, water and pasta. Heat to a boil. Cook over medium heat 10 minutes or until done, stirring often. Serves 4.
WHAT WE DID/ WOULD DO: We doubled the recipe and cooked in a 12 inch Dutch Oven. We added a couple heaps of broccoli for some added vegetable content. If I had thought of it I would have diced up some onion to cook with the ground beef. I would have substituted the Pepper Jack Soup for the cheddar but they didn't have it at the store I went to. Then when Matt stopped in wearing a sombrero... well too late to make it Mexican then, it was already cooking.
The recipe says serves 4 but we polished off the whole pot(recipe doubled) between 5 of us. 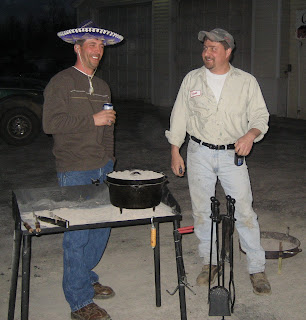 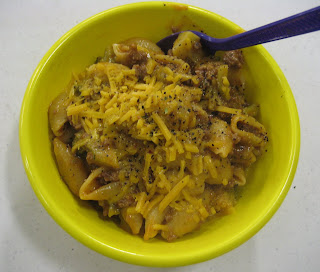 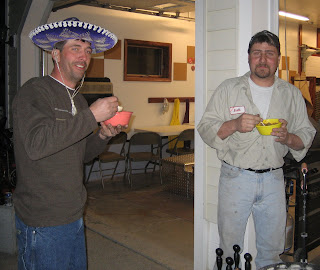 Pigs in a cornfield near the apple orchard. 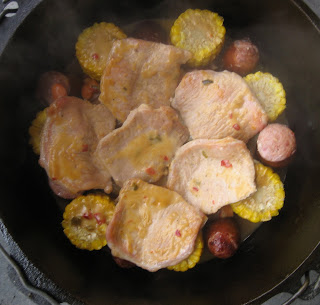 Sunday cooking mmm-mmm good. First we cooked Pigs In A Cornfield
I saw this recipe on the dutch oven cooking group and just had to try it. With a name like that how could I not?!
Here's the recipe as posted by Mark Wilkins:

Line the oven with standing half ears of corn on the cob. Stand links of Keilbasa Sausage in between the corn. In the center place some sliced potatoes, diced onion, diced celery, diced green chillies. Top with a can of Campbell's Southwest Pepper Jack soup. Season some pork of your choice, like pork chops. Place on top and then cover with another can of Pepper Jack soup. Cook til done. Best to do in a deep oven if possible allowing more head room. Very tasty one pot meal; you can substitute any flavors of soup you desire, or mix & match. Vary vegetables as well. Lot's of choices.

What we did: I used frozen 3-inch corn cobs they came 12 to a package. Too many for one pot so I arranged them in my 12-inch DO and the brand new 10-inch. Would like to try it with fresh corn. The frozen always seems kind of mushy to me. I used canned chopped green chilies. I used boneless pork but it was sliced a little thin and I didn't really buy enough for two pots but we made do. I did have enough keilbasa, potatoes, onions, carrots, and celery. I had only bought the 2 cans of soup so we had to stretch that a little but everything tasted great so I think it was enough to give it that flavor. 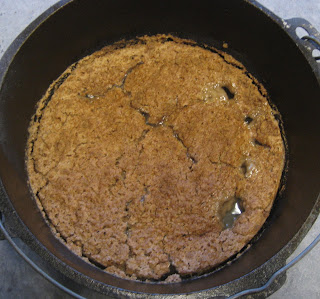 Next we made what I'll call Apple Spice Cake
We used a recipe from So Ca Chapter IDOS Cookbook called Convertable Dump Cake that was submitted by Doug Ernst
Basically you pick 2 cans (20 ounces with juice) of fruit, 1 box of cake mix, and one can of lemon lime soda, not diet.(or 2 sticks butter, sliced or melted)
We used 2 cans of Apple Pie Filling, covered with a box of Spice Cake mix, and poured in one can of Sierra Mist, barely stirred in with a few swirls with the end of the spoon and cooked for 45 minutes.
We served with Vanilla Ice Cream and it was a big hit! It's kind of a cross between apple pie, apple crisp, and cake. Whatever you call it, it's delicious!

Shopping to feed my Addiction 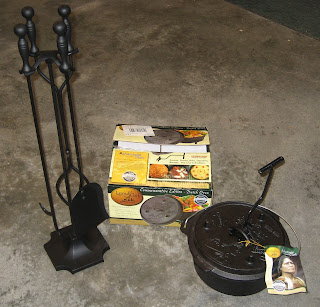 OK, I think this new hobby is turning into an obsession! I've been shopping! We've been planning on adding a second Dutch Oven but what to buy? We were thinking a 12 inch shallow (6 quarts). I've seen the Lodge at a few different stores- $60 at Gander Mountain, $53 at Tractor supply, $48 at Wal-Mart. Then at Dick's Sporting Goods I found a Camp Chef Lewis and Clark 10 inch - also 6 quarts. Price $19.97 and it comes with a pretty nice lid lifter. So, at less than half the price for the same number of quarts, how could I resist??
I also found a fire place shovel for shoveling the coals (moving those coals one at a time with the tongs is a real pain in the you know what!). Actually it's a set with stand, log lifter, poker, and of course the shovel! I don't have a fireplace but they will come in handy around the campfire and they were on sale! Regular $14.99 for $5.00! Now I'll just give my husband the job of drilling the holes for the ash to fall through. So as you can see it has begun. I wonder when it will end ;D (Is there a treatment program for castironitis?)